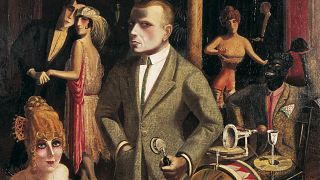 A vast multidisciplinary exhibition at the Pompidou Centre in Paris is shining a light on an often-overlooked art and culture movement in interwar Germany that was later expunged by the Nazis.

Bringing together some 900 works of painting and photography, architecture, design, film, theatre, literature and music, the exhibition, which opened on Wednesday, is the first panoramic view of 'New Objectivity' to be displayed in France.

In this period, the Pompidou asserts, "Artists saw their idealistic illusions disappointed, especially with respect to the conflict that some had initially portrayed as an epic tale. This prompted them to turn to reality.

Running through the collection is what curators have dubbed an 'exhibition-within-an-exhibition': a celebrated series of portraits of German society by the photographer August Sander (1876-1964), 'Men of the 20th Century'.

The influential photo series is interspersed with the rest of the collection and supplanted with documents that contextualise Sanger's work with a cross-section of society in the Weimar Republic.

After Hitler came to power in 1933 artists of the New Objectivity movement were decried as "degenerate" by the Nazis, like those of Dadaism, Surrealism and Cubism.

The exhibition culminates with a screening of archived footage assembled by the artist Arno Gisinger, retracing the destiny of New Objectivity artworks that were stripped of their avant-garde status overnight.

What was the Weimar Republic?