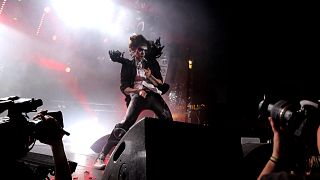 The Air Guitar World Championship was first held in 1996 as part of the Oulu August Festival. The declared aim of this unusual competition is to "promote world peace".

According to the organisers, air guitar is an ideal medium to promote peaceful coexistence, as it is a form of expression open to all.

Kirill "Guitarantula" Blumenkrants (French) was crowned the new Air Guitar World Champion because he scored the most points in the world final.