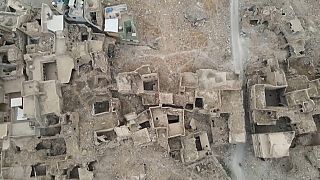 Buildings, houses and the destroyed 12th century Great Mosque of al-Nuri in the old west side of Iraq's northern city of Mosul are filmed by a drone.

IS chief Abu Bakr al-Baghdadi made his only confirmed public appearance in July 2014 at the al-Nuri mosque, where he declared the establishment of a "caliphate."

Three years later Iraq's army and a US-led international coalition had forced the jihadists out of Iraq's second city.

The al-Nuri mosque, and the adjacent leaning minaret -- nicknamed al-Hadba or the "hunchback" -- were destroyed in June 2017 during the battle to take back the city.