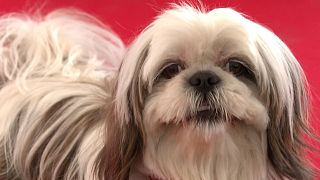 Brittany, the grey poodle, is one of the first big winners at this year's Cannes Film Festival.

The dog, who stars as Beast in "War Pony," has been handed the Palm Dog award at the beach event in the South of France.

In true superstar style, Britt (as she's also known) was unable to attend the ceremony and instead a stand-in posed on stage with the Palm Dog winning collar.

It premiered at the Cannes Film Festival in the Un Certain Regard section.

More prizes will be given out to filmmakers and stars on the closing night of the event - Saturday 28 May.