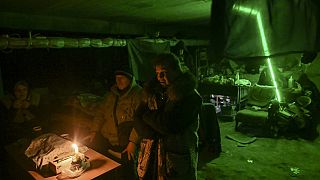 After weeks of bombardment by Russian troops, the frontline Saltivka district of Kharkiv has become a ghost town.

Most of the locals have fled the incessant Russian air strikes, and those who remain have had to take refuge in underground shelters as they are either too old, too unwell or too disabled to leave.

Russian forces have thrown their full weight at Saltivka, pounding it almost daily since they invaded Ukraine on February 24.

Why here? Saltivka is closer to the rich black soil of the surrounding fields than to the centre of Ukraine's second-largest city.

But a Ukrainian air defence unit was stationed on the edge of the neighbourhood in the early days of the conflict and Ukrainian troops have been firing rocket launchers at the Russians from the vicinity.