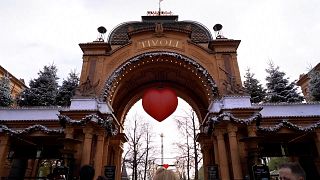 Danes with their Corona Pass health cards are returning to the Tivoli Gardens amusement park in Copenhagen.

The 178-year-old tourist attraction opened for the holiday season on Friday, November 19, decked out with 1,000 Christmas trees, 3.5 kilometers of garland and 70,000 baubles.

Tivoli opened in 1843 and is one of the oldest amusement parks in the world.

It was founded by the developer Georg Carstensen, who was inspired by several parks and gardens he had visited abroad.

The gates were first opened on August 15, 1843. Among the first visitors was Denmark's most famous writer, Hans Christian Andersen.

And the theme park says Walt Disney visited the park several times in the 1950s, hoping to use it as inspiration for Disneyland.

As day turns to night, about a million lights fill the theme park with a festive glow. The Nimb Hotel in Tivoli is lit up with huge light projections.