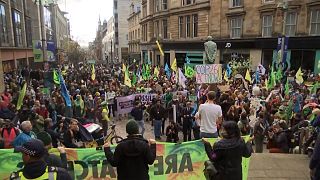 Protesters took to the streets in Glasgow on Wednesday to denounce what they say is 'greenwashing' by companies as the climate conference continued in Scotland.

The demonstration came as governments and big investors announced fresh plans to pour trillions of dollars into curbing global warming, reflecting the financial world's growing embrace of efforts to fight climate change as both a business necessity and opportunity.

But some social justice activists called for scrutiny of investors' motives, warning that the same financial institutions which profited from funding fossil fuel firms were now being presented as green champions.

There is a growing consensus that the private sector must be involved if the world is to avoid catastrophic global warming.

Speaking at the U.N. climate summit in the Scottish city of Glasgow, Britain's Treasury chief Rishi Sunak said that while countries such as the U.K. are stumping up more cash to fund the shift to low carbon economies around the world, "public investment alone isn't enough."

He praised a pledge Wednesday by a group of over 450 major financial institutions to align their investments with the 2015 Paris climate accord — which calls for reducing carbon dioxide emissions and other efforts to limit global warming to 1.5 degrees Celsius (2.7 Fahrenheit) above pre-industrial levels.

"This is a historic wall of capital for the net-zero transition around the world," Sunak said at the conference known as COP26.

That goal — which means limiting greenhouse gas emissions to the amount that can be absorbed again through natural or artificial ways — is increasingly being embraced by companies and governments around the world.

Experts say fossil fuel use has to drop drastically over the coming decade to cap warming at 1.5C, meaning investors would likely have to dramatically cut back money going to oil, gas and coal producers.

But enthusiasm about the meeting was dampened among poorer countries, who noted angrily that Britain and other wealthy nations have failed to meet a previous commitment to provide $100 billion a year to finance climate-related projects in the developing world by 2020.