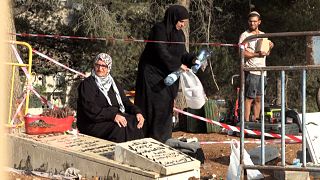 Israeli police kick Palestinians out of the al-Yusufiye cemetery near the Lion's Gate entrance to the Aqsa mosque compound in east Jerusalem as the construction of the Jewish National Park continues.

Many graves located at the al-Yusufiye cemetery have been bulldozed, causing outrage.

Palestinian mother Ola Nababteh whose son is buried at the al-Yusufiye cemetery says she "had to move bones around so that she could reach her son's grave," a day after she was dragged away by Israeli police as she tried to cling to her son's grave.