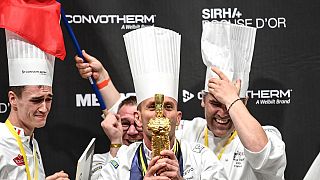 Eight years after its last victory, France won the final of the prestigious Bocuse d'Or culinary competition on Monday, September 27, during the International Catering Exhibition held near Lyon.

Created in 1987 by Paul Bocuse, this competition, a sort of world cup for chefs, is held every two years.

The French team was led by Davy Tissot, who holds a Michelin star and runs Saisons, the training restaurant of the Paul Bocuse Institute in the Lyon area. The Silver Bocuse was awarded to Denmark and the Bronze to Norway.