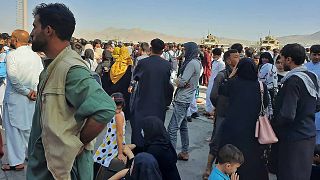 Thousands of people packed into the Afghan capital's airport on Monday, rushing the tarmac and pushing onto planes in desperate attempts to flee the country after the Taliban overthrew the Western-backed government.

U.S. troops fired warning shots as they struggled to manage the chaotic evacuation.

Taliban patrolled Kabul and tried to project calm after toppling the Western-backed government after they swept through the capital on Sunday.

The country's Western-trained security forces collapsed in a matter of days, even before the withdrawal of the last U.S. troops.

President Ashraf Ghani fled the country, bringing a stunning end to a two-decade campaign in which the U.S. and its allies had tried to transform Afghanistan.