President Joe Biden has defended his decision to withdraw US troops from Afghanistan, in his first intervention since the Taliban takeover of the country including the capital Kabul.

His TV intervention follows chaos, panic and confusion at Kabul airport on Monday as thousands of Afghans converged on the runway in a desperate attempt to get out of the country after the Taliban seized power.

US forces at the airport were forced to fire into the air to restore calm. US officials say several people have died.

Taliban fighters entered Kabul on Sunday morning after capturing the country's biggest cities in a swift two-week campaign, amid the controversial withdrawal of US and Western troops from Afghanistan.

See our live blog below for latest updates. Key developments in summary:

22:53
That's the end of our live updates for today, thanks for following Euronews. See euronews.com for all the latest stories, follow us on social media, and watch our TV coverage here:

Biden on 'gut-wrenching scenes' from Kabul

The US would not repeat mistakes of the past, the president continued in his defence of the American troops withdrawal.
After a day of chaos at Kabul airport he referred to "gut-wrenching" scenes that would be painful for US veterans and the families of those who had lost loved ones in the conflict. He acknowledged this would be "deeply, deeply personal".
He warned the Taliban that if US personnel were attacked, the US response would be forceful.
But, he added, the scenes showed that "no amount of military force" would bring stability to Afghanistan.
Biden's address ended after 20 minutes and he took no questions from reporters.
22:33

The President continued saying there was "never a good time to withdraw" troops from a country like Afghanistan.
He had always promised this would happen, although recent events "did unfold more quickly than we had anticipated" - his first reference to the Taliban's rapid advance.
Afghan leaders gave up and fled, Biden said. The Afghan military did not fight.
"Americans cannot and should not be fighting in a war and dying in a war" that Afghans will not fight themselves, he added.
22:29

The US president reminded his audience that when he came into office he inherited the deal Donald Trump did with the Taliban in 2020, to get US forces out by May 2021.
He said troops had been reduced from 15,000 to 2,500.
"My choice as president was to follow through on the agreement or go back to fighting the Taliban," he said. If the latter there would have been no ceasefire after May 1, but only an escalating conflict, with thousands of American troops sent back into Afghanistan to fight the Taliban, he added.
22:25

Biden: 'if necessary US will intervene in Afghanistan again'

Biden listed terror groups the US has tackled in Africa and Asia, from al Shabab to ISIS.
The US had focussed its attention and resources with effective missions in places where there it had no permanent presence, he said. If necessary it will do so again in Afghanistan, he added.
22:22

Biden began his TV address saying the US mission was never "nation building".
The only reason for the US mission in Afghanistan was to prevent a terror attack on American homeland, he said. It was counter terrorism not counter insurgency. The focus is on threats today in 2021 not yesterday.
22:10

Biden: 'I stand squarely behind my decision' on troops withdrawal

President Biden has begun his anticipated address from the White House, his first intervention since the Taliban's lightning takeover of Afghanistan and its Kabul.
"I stand squarely behind my decision" on US troops withdrawal, he said.
21:50

Fact check: French ambassador did not leave Kabul amid Taliban seize of power

Misleading claims online had falsely suggested that David Martinon, France's ambassador to Afghanistan, had left the Afghan capital on a military plane as the Taliban seized power.

But France had instead moved their embassy operations across the city to Kabul's airport to continue the evacuation procedures.

READ MORE here for the full story from The Cube: 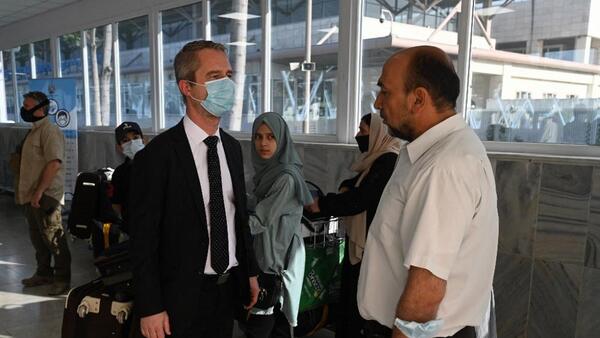 euronewsMisleading rumours falsely suggested that France's Ambassador to Afghanistan had left Kabul, but he had instead moved the embassy's operations to the airport.
21:16

Biden to address US nation shortly on deadly Afghan chaos

President Joe Biden is due to address the nation in around half an hour's time (21.45 CET) about the US evacuation from Afghanistan, after the planned withdrawal of American forces turned deadly at Kabul’s airport.

Biden returned to the White House Monday afternoon from the Camp David presidential retreat. It will be his first public remarks on the Afghanistan situation in nearly a week.

Biden and other top US officials had been stunned by the pace of the Taliban’s swift routing of the Afghan military.

The speed of the Afghan government’s collapse and the ensuing chaos posed the most serious test of Biden as commander in chief, and he came under withering criticism from Republicans who said that he had failed. (AP)

From the overthrow of the monarch in 1973 to the return of the Taliban today... Lauren Chadwick runs through the main events in the troubled nation's history to give some context to today's tragedy.
READ MORE: 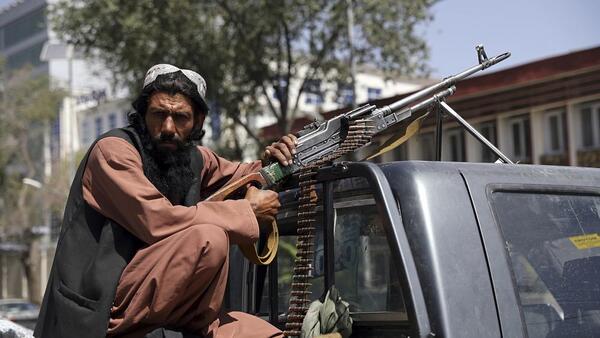 Afghanistan in context: What's the background to today's crisis?

Footage released on social media by journalists at the scene reveals scenes of desperation as people jostled in the hope of securing a place out of the country.

It comes less than a day after Taliban insurgents entered the capital after sweeping the country in a power-grabbing operation that has surprised Western countries by its swiftness.

A Taliban spokesperson and negotiator told the Associated Press news agency that the militant group is holding talks aimed at forming an “open, inclusive Islamic government” in Afghanistan.

Earlier, a Taliban official said the group would announce a new government from the presidential palace, but those plans appear to be on hold.

The United Nations Security Council has announced that it will hold an emergency meeting on Monday at 16:00 CEST to discuss the situation in Afghanistan. The European Union's Political and Security Committee will meet an hour earlier by videoconference with Belarus also on the agenda.

European Union Foreign ministers will convene on Tuesday afternoon for an extraordinary meeting, the bloc's top diplomat has announced.

"Afghanistan stands at a crossroad. Security and wellbeing of its citizens, as well as the international security, are at play," Josep Borrell said.

The Taliban sought to project calm on Monday, circulating videos on its official social media accounts of fighters deployed throughout Kabul.

The posts said the fighters were deployed to "provide security" to Kabul residents. One said "the general public is happy with the arrival of the Mujahideen and satisfied with the security."

Spokesman Suhail Shaheen also stressed that fighters had been instructed not to enter anyone's house without permission".

He also rejected accusations that single women were being forced to marry Taliban fighters as "poisonous propaganda."

The Taliban ruled Afghanistan from 1996 to 2001 with a harsh form of Islamic law. Women were largely confined to their homes and suspected criminals faced amputation or public execution.

According to UN Secretary-General Antonio Guterres, more than 1,000 people have been killed or injured in the past month alone "in indiscriminate attacks against civilians."

At least 241,000 were forced to flee their home as the Taliban advanced through the country.

"I am also deeply disturbed by early indications that the Taliban are imposing severe restrictions on human rights in the areas under their control, particularly targeting women and journalists. It is particularly horrifying and heartbreaking to see reports of the hard-won rights of Afghan girls and women being ripped away from them," Guterres said last week.

More than 70 countries, including most European union member states, the UK and the US, have meanwhile urged the militant group to "respect and facilitate" evacuations of foreign nationals and Afghans who wish to leave the country.

Washington intends to have enough aircraft to fly out as many as 5,000 civilians a day, both Americans and the Afghan translators and others who worked with the U.S. during the war.

France's Minister for Armed Forces, Florence Parly, said two military planes would from Monday fly back and forth between Kabul and Abu Dhabi in the United Arab Emirates to evacuate people.

A group of 70 Italian diplomatic staff and Afghans who have worked with Italy boarded a military evacuation flight in Kabul late Sunday night. It is expected to arrive in Rome at 12:00 CEST after stopping in Kuwait.

Czech Prime Minister Andrej Babis also announced on Monday that the country's first evacuation flight had taken off from Kabul's international airport with 46 people on board. They included Czech nationals, the Afghan staffers at the Czech embassy and Afghan interpreters who helped the Czech armed forces during NATO missions together with their families.

"The aim of the mission is to bring German nationals, Afghan local staff and others to be protected by Germany," the Defence Ministry said.

Sweden also announced that 19 embassy employees had been flown out of Kabul while Denmark and Norway said the bulk of their embassy staff was now also out of Afghanistan.

Portugal’s defense minister João Gomes Cravinho told public broadcaster RTP late Sunday that the country is prepared to take in 243 Afghans, and their families who worked with Portuguese forces stationed in the country.

Lisbon is coordinating the evacuations with NATO as it doesn't have the military capacity to do so.

However, it is unclear how long Kabul’s deteriorating security would allow any evacuations to continue.

A spokesperson for the Taliban said on Twitter: "We assure all embassies, diplomatic missions, institutions and residences of foreign nationals in Kabul that there is no danger to them."

Russia has meanwhile announced that its ambassador to Afghanistan will meet with a Taliban representative on Tuesday to discuss security for the diplomatic mission, adding that the outside perimeter of the embassy is already being guarded by the Taliban.

Ambassador Zamir Kabulov told the Ekho Moskvy radio station that some of roughly 100 Russian embassy staff “will be placed on leave or evacuated in some other fashion just in order not to create too big a presence."

He described the Talian swift advance through the country as “somewhat unexpected", saying that Russia was “too optimistic in our assessment of the quality of the armed forces trained by the Americans and NATO."

A Chinese Foreign Ministry spokesperson, said on Monday that Beijing, which shares a border with Afghanistan, would respect the choice of the Afghan people when asked whether they will recognise a Taliban government. China

Hua Chunying noted the Taliban pledges to negotiate the establishment of an inclusive Islamic government and to ensure the safety of both Afghans and foreign missions. China, she added, hopes that would “ensure a smooth transition of the situation in Afghanistan.”

British Airways confirmed to Euronews on Monday morning that it is "not currently using Afghanistan's airspace."

Air France also confirmed to Euronews on Monday that it has been rerouting flights to avoid Afghan airspace.

"Air France is constantly monitoring the current geopolitical situation in Afghanistan and the territories served and flown over by the airline's aircraft," it said in a statement.

"Flight plans are adjusted in real-time according to the decisions of the French and regional authorities, in order to ensure the highest level of flight safety," it added.

Virgin Atlantic said in an emailed statement to Euronews that "following the latest situation reports in Afghanistan, we will be re-routing our upcoming services to avoid Afghanistan’s airspace."

Its flights to Pakistan and India typically overfly Afghanistan.