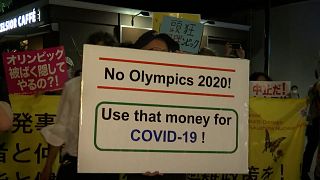 Anti-Olympics protesters on Friday marched from Harajuku to Sendagaya ahead of the Olympic Games opening ceremony.

Protesters have criticized the Japanese government for what some say is prioritizing the Olympics over the nation's health.

Spectators have been banned from all venues in the Tokyo area, with limited audiences allowed at a few outlying sites, in a step taken by the authorities to try to curb the spread of the coronavirus.

About 23% of the population of more than 120 million has been fully vaccinated, a number that has picked up since May but is still far short of where Japan's government had hoped to be before the Olympics.