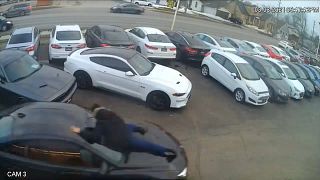 Police in London, Ontario, are asking for help to track down two people involved in a car theft.

The theft left a salesman in hospital and surveillance video captured the incident.

Local authorities said the suspects arrived at a car dealership in March to inquire about a black BMW.

The suspect put the car in gear and drove off with the salesman holding on for dear life.

The salesman was taken to hospital and reportedly suffered lacerations to his feet after his shoes and socks came off during the fall.