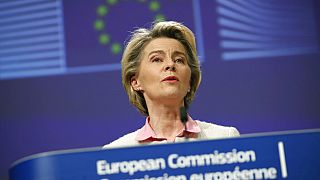 COVID-19 has weakened the case for the EU, Euronews survey reveals

The COVID-19 pandemic has served to weaken the case for the European Union.

That is the prevailing view in Italy, Germany, France and the United Kingdom, according to a Euronews-commissioned survey.

The EU has been criticised for its role in the slow vaccine rollout, which has seen countries outside the bloc race ahead.

Four-in-ten respondents in Germany, Italy and France believe the coronavirus crisis has weakened the case for the EU.

That was also the majority view in the UK, despite Brexit.

So if the majority believe the pandemic has weakened the case for the EU, is that to say that Brussels has not helped out during the crisis?

Well, the results are mixed.

The prevailing view in Germans is that the EU did not help. Italians were the most positive, with four-in-ten believing Brussels had helped.

Meanwhile, a strong majority of respondents from the EU countries questioned believe members of the bloc acted separately during the pandemic. Indeed, around just one-in-five in France, Germany and Italy thought EU members acted together.

On a national level, the prevailing view in France and Germany is that the country is not taking the right measures to address the pandemic.

This feeling could be attributed to the vaccine rollout, as in the UK a majority think the nation is moving in the right direction.

The pessimism in France is reflected in approval ratings for leaders' handling of the coronavirus crisis.

Of the four countries, Chancellor Angela Merkel has the highest proportion of respondents believing she made the right decisions.

Find out more by watching the video report, above.