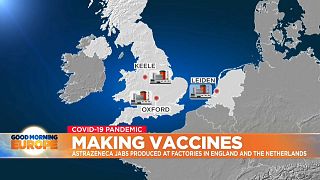 From factory to arm, the logistics of rolling out the AstraZeneca jab

How does the vaccine get from the factory to your arm?

The Oxford-AstraZeneca vaccine, which has only so far been approved in the UK, is produced in three factories.

Two of them are in England, at Keele and Oxford, while another is in Leiden, in the Netherlands.

Large quantities of the liquid are then taken to specialists in Wales and another in Germany to divide it into vials or bottles.

Because the vaccine has only received emergency approval, each batch must be quality tested at a government laboratory.

After that, it is then dispatched to vaccination centres around the country.

"There’s a lot of different parties that are all feeding into that supply chain to get from the factory to a patient’s arm at the end so it’s a massive co-ordination question," Professor Beate Kampmann, director of The Vaccine Centre at the London School of Hygiene and Tropical Medicine, told Euronews.

"We know big vaccination campaigns. Humanitarian organisations do these quite frequently around the world, but we’ve never had anything of that scale where the entire globe basically needs to be vaccinated at the same time."

Will the UK be able to administer two million vaccines a week?

The pace of the rollout was ramped up this week with the opening of seven large vaccination centres around the country.

They include a football stadium in Bristol, Epsom racecourse in south-east England and a tennis club in Manchester.

Opening such large-scale vaccination centres has been made possible by the fact the Oxford-AstraZeneca vaccine, unlike the Pfizer one, does not have to be stored at ultra-cold temperatures.

The step-up in intensity is part of the UK's government target to vaccinate around 15 million vulnerable people by mid-February.

"I think it’s feasible," said Prof Kampmann. "The best analogy is probably the flu programme which delivers enormous amounts of vaccines; I think about a million a week. But we have to double that and we need to make sure that there are no hitches in the supply chain."

Are there any issues with the supply chain?

As well as the larger centres such as the football stadium in Bristol, community-level sites, like schools, are being put forward as places to host COVID-19 vaccinations.

Private companies are also coming forward to help. Pub chain Brewdog has offered its shuttered premises as somewhere vaccines can be administered, while supermarket Iceland has put forward its refrigerated trucks.

But Sarah Schiffling, a humanitarian logistics expert at Liverpool John Moores University, is not so sure this is a good idea.

"It comes back to a question of coordination;" she said. "How many different parties have we got and can we all align them so we’ve got one coherent supply chain?

"Or does it take more effort to try to coordinate all of these individual bits and pieces than it’s actually worth in the end?"

Watch Tadhg Enright's full report in the player above.