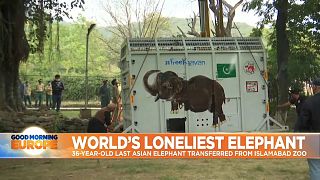 He is 36, overweight and friends with a global superstar. After public outcry and campaigning by U.S. singer Cher, the world’s ‘loneliest elephant’ was finally moved from Pakistan to Cambodia.

For years Kaavan was living in substandard conditions in an Islamabad zoo. Now he will retire from public view in an animal sanctuary, surrounded by other elephants. A team of vets from charity Four Paws spent months working getting him ready for the long trip.

A cargo plane was needed to move Kaavan to his new Cambodian sanctuary. His keepers had to train him to stay calm inside the cage, sometimes for hours at a time. Ingo Schmidinger, from Four Paws International, says it was important for Kaavan to stay calm and secure during his long flight to avoid getting the plane used for his transport out of balance:

"Besides all the physical damage that Kaavan has suffered, the isolation that he has lived in for the past eight years has made him develop mental health issues. We could compare it to the people being in isolation during the pandemic, elephants are highly social, like humans. He also started to get a bit violent. We are hopeful that he will integrate quickly with his new friends in the sanctuary, who are three females, but it might take a few months to get him used to them. The logistics of his transportation are incredibly complex. He is obese and very tall, weighing 4 tonnes before his diet."