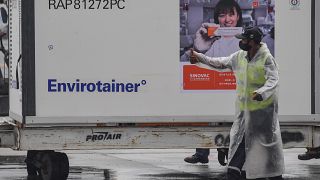 Brazil has received its first batch of the Chinese-made CoronaVac vaccine despite a political and diplomatic row over whether to use it.

The vaccine arrived in Brazil through an agreement with the Butantan Institute, attached to the São Paulo government, and became the subject of a dispute between the far-right president Jair Bolsonaro and Sao Paulo Governor Joao Doria.

The confrontation rose a few decibels last week when the national health surveillance agency (Anvisa) suspended the trial of volunteers in Brazil for 48 hours, arguing "a serious incident" occurred during the tests with CoronaVac.

Trials were resumed on Wednesday.

The suspension had led to a storm of complaints that the action was more political than scientific.

The agency had cited an “adverse, serious event” that occurred on Oct. 29 as the reason for halting the trials on Monday night, but said on Wednesday it now “has sufficient elements to allow vaccination to resume”.