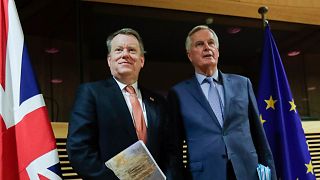 It came as Barnier, the EU's chief Brexit negotiator, denied claims Brussels is trying to impose some kind of blockade between Northern Ireland and the rest of the UK that would stop food imports from Britain.

But his UK counterpart Frost fired back. He claimed to have been told in negotiations that there was no guarantee the EU would list Britain as a "third country" for food exports, thereby making it illegal for Northern Ireland to import from the rest of Britain.

The row came after Brussels demanded more clarity about the UK's hygiene and disease control procedures regarding food exports.

That followed the UK angering the EU by introducing legislation that if passed would over-ride aspects of the withdrawal agreement.

“Sticking to facts is also essential,” Barnier tweeted, “to be listed, we need to know in full what a country’s rules are ... for imports.”

But hitting back, Frost stressed on Twitter that the EU had threatened to not allow food imports to enter Northern Ireland.

Taking aim at his EU counterpart, Frost stressed he wanted to “state a few facts” and also stressed that the UK conforms to current EU food standard rules.

"I hope the EU will yet think better of this," Frost tweeted in response to Michel Barnier.

"It obviously makes it no easier to negotiate a good free trade agreement and the solid future relationship which we all want."

The argument about a trade border in the Irish Sea has become one of the most contentious issues in ongoing talks.

Boris Johnson's government is also reportedly preparing to opt-out of the European Convention on Human Rights.

The EU has around a month left to conclude negotiations or the UK will default to economically damaging WTO rules for trade when the transition period ends on December 31.