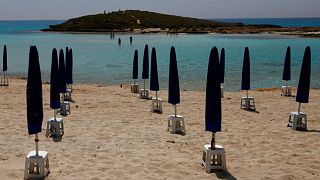 If you’re dreaming of lying on a sunny beach this summer after weeks stuck indoors, maybe your hopes aren’t totally quashed.

European tourism ministers have pledged to support the industry, which makes up 10 per cent of the EU's GDP.

However, they want the bloc’s external borders to stay closed until mid-June, leaving many in the continent’s hospitality sector unsure about what to expect.

The travel industry is desperate to recoup losses from coronavirus shutdowns, while authorities are wary of opening up too soon amid fears of a second wave of infections.

The EU, meanwhile, is trying to ensure that the reopening of countries’ borders and hotels is coordinated.

Greece will be among the first to kick off its tourist season, opening its hotels from June 15 and resuming international charter flights to popular locations in July. It insists that safety remains a priority.

"Sample coronavirus testing will be conducted on our visitors and our general health protocols will be adhered to, without them, however, overshadowing our bright sun or the natural beauties of Greece," Greek Prime Minister Kyriakos Mitsotakis said in a televised address to the nation on Wednesday.

The Greek announcement came as EU tourism ministers agreed to do "whatever it takes for the quick and full recovery of European tourism".

Mitsotakis said visitors would be subject to sample coronavirus testing and "our general health protocols will be adhered to".

The government imposed a lockdown early in Greece's outbreak, which has been credited with keeping the number of deaths to relatively low levels.

To encourage tourism, Greece is also reducing consumer taxes on transport from 24 per cent to 13 per cent, which will lead to cheaper boat, plane and bus tickets during the tourist season.

Italy is also making moves to entice tourists by announcing that all its airports could reopen on June 3 for national and international flights.

Some resorts have been preparing for this moment.

"The real turning point will be the opening of our borders because, for people like us, whose customers are 60 per cent foreigners, it's important to know when they’ll be able to take holidays in Italy," said Christofer De Zotti, manager of the Beach Resort Hotel Mondial in Jesolo, east of Venice.

Last week, the European Commission proposed a gradual lifting of travel restrictions throughout the bloc.

Currently, France is only allowing essential travel from abroad and while its beaches are open, sunbathing is banned.

Slovenia has for its part said it plans to offer €200 vouchers to its citizens to urge them to holiday in their home country rather than abroad.

In Spain, foreign holidaymakers are more likely to be allowed back to the country’s islands before its biggest cities. The country has seen one of Europe's strictest lockdowns and the rules are gradually being relaxed on a region-by-region basis.

Barcelona, which has been hard-hit by the COVID-19 pandemic, has just begun to re-open its parks and beaches, but only to residents.

And some are finding benefits in a quieter urban life.

"It is more charming when there are fewer people," said local resident Emma Praes. "Normally I do not come to these beaches, I usually go more to the Costa Brava or the Costa Dorada."

While governments want to support tourism, hygiene and social distancing will have to feature highly in any possible holiday this year.