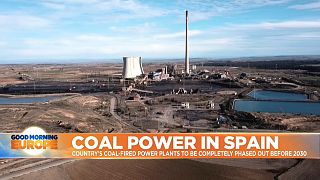 Spain plans to phase out coal-fired power plants by 2030

While some countries across Europe are resisting leaving coal power behind, Spain is speeding up its transition.

Only three out of 15 coal-fired plants in the country will remain operational by 2022. The market is outpacing the Spanish Government’s plans, which has recently declared a climate emergency. But the Spanish transition to a green economy is raising concerns among workers who demand a socially fair transition.

After 40 years lighting up thousands of homes, another coal-fired power plant is closing down as Spain phases out coal faster than ever. Its share of power production has been reduced from 15% to 5% in less than a year, and it will be completely replaced before 2030. But, in the city of Teruel, they refuse to let their livelihoods fade away with the coal emissions, and they believe they have found a solution.

Endesa, the company that keeps this power plant, say the high cost of a tonne of CO2 in the carbon emissions markets is making coal power unprofitable.

Ignacio Montaner is Endesa’s General Director in the Aragon Region:

“If you'd make a survey, everybody would agree on closing coal-fired plants. But, in the region where this power plant is based for many years and it's been the main economy motor, they would say we want a transition that is not leaving behind workers and the people of that region.” Montaner goes on:

“It is clearly the end of an era, but here thankfully there is a transition.”

The plant is now running on coal left-overs. And the former coal storage fields are about to have a new life.

As part of its socially fair transition plan, Endesa has pledged to invest 1,5 billion Euros to build the biggest solar farm in Europe, that will employ 4 thousand people during the scrapping of the plant and the installing of the solar panels. It has also guaranteed 140 jobs once the new facility is operational.

But only 4 months before its definite shut down, workers are complaining the project doesn't have any specific goals yet. Antonio Planas is a former coal miner who worked at the power plant 27 years ago. He fears just ditching coal for green power maybe not be enough:

“It has more future than coal. Of course it has. But what about jobs? There's some of my workmates that, at only 35-40 years old, with their kids. They will have to leave. And that is not fair.”

But others hope they can find a new beginning in the future power plant.

“With my skills, after many years in maintenance and operations of a coal power plant, I could easily work as a supervisor in a solar farm.”

For now, these workers have just only one certainty - coal is over. Teruel will have to wait five years to prove if it can find a way to transition to a socially fair age that can work as an example for dozens of coal-fired plants across Europe, before the climate emergency becomes a social emergency.