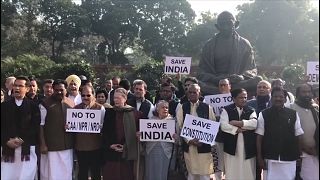 Opposition politicians in India held a protest outside the country's parliament in New Delhi over a controversial new citizenship law.

People from different faiths and backgrounds have united over opposing the law because it is seen as threatening the secular fabric of India.