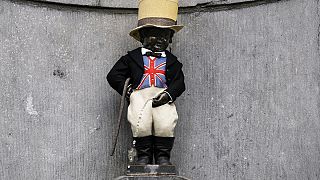 Brussels' best-known landmark has been dressed in a Union Jack waistcoat, top hat and suit jacket ahead of Brexit.

Manneken Pis, a sculpture of a naked boy urinating in a fountain, was embellished with the UK set to leave the EU.

In the same city on Wednesday, MEPs approved the Brexit deal, paving the way for the UK to leave at midnight CET on Friday evening.

It comes 43 months after Britons voted in the June 2016 referendum to leave the EU, ending more than four decades of economic, political and legal integration with its closest neighbours.