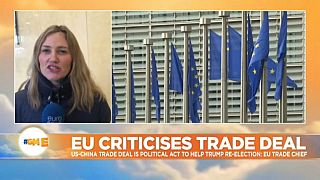 While markets have responded positively to the first phase of the new trade deal being signed between China and the US, leaders in Brussels have offered a strong critique of the deal.

While Beijing and Washington are heralding the pact as welcome respite in an ongoing trade war, the EU's trade commissioner, Phil Hogan, has criticised the move as a political stunt designed only to help Trump get re-elected in November's election.

“Let’s look at the detail of what that has actually achieved, we still have 20 per cent tariffs on both sides. This is not going to be good for competitiveness or jobs, which is the desired objective of President Trump,” he said.

“In the short term, it might work between now and November as a politician, I understand the way it works.”

You can watch the full interview in the player above.