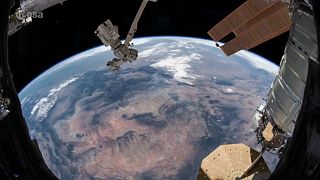 The European Space Agency (ESA) has outlined its mission schedule for 2020, telling Euronews a number of satellite launches and space flights will take place across the year.

In a wide-ranging interview with Euronews' Good Morning Europe programme, the Director-General of the ESA, Jan Wörner, said it was an exciting time for space exploration.

"We are planning a lot of things this year. We are starting this week with another launch from French Guinea. It is a public partnership launch for satellite navigation,” he said.

"Then in February, the next launch will take place which is called Solar Orbiter and will investigate the sun. The sun is very important not just for daylight but also for monitoring solar flares and solar storms which can really have an impact on electrical systems and internet connections."

While the likes of Richard Branson and Elon Musk push forward with plans to send travellers into space, the ESA said that while it doesn't directly have plans to join them, it supports their endeavours.

“We are a public organisation. We are not disturbing the commercial market but we are supporting it to develop new fields. Space tourism will certainly come, not just in lower orbit but also to the moon,” Wörner said.

Is anybody out there?

On the all-important question of whether life exists outside of Earth, Wörner said its likely humans are sharing the universe with others.

"I'm quite sure... that we are not alone in the universe," he said.

'The explosions keep roaring': No rest in Kherson from Russian assault

Five new developments to know about the Ukraine war