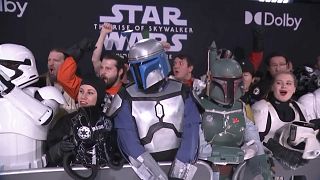 Star Wars fans out in force for 'The Rise of Skywalker'

Fans were out in force on Monday for the world premiere of “Star Wars: The Rise of Skywalker”, the ninth and movie in the sci-fi franchise about a Jedi master.

The film concludes the so-called "Skywalker saga" of films begun by George Lucas in 1977.

Analysts predict a stellar $200-$225 million at United States box offices this weekend, which would put the film's opening among the biggest in history.

Disney chief Bob Iger told AFP that fans would get "some kind of closure, some sense of satisfaction" for their favorite characters.

"Star Wars is probably the most important, most valuable mythology of our time, of the modern time," he said.

"If you just consider the global base of fans that have worshipped this storytelling since 1977, over 40 years... tonight being a culmination of nine films is an incredibly important night."

The film is due to be released in France, Germany and the UK on Wednesday.