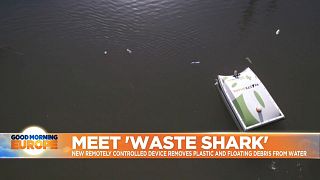 The climate emergency is not the only environmental issue the world is struggling to solve. Plastic products clog our oceans, threatening marine life and polluting the water. At current rates plastic is predicted to outweigh all the fish in the sea by the year 2050. In Holland, a new device is a small sign of hope. 'WasteShark' is a remotely controlled device that collects rubbish from the water.

This mini-catamaran has been developed to remove plastics and other floating debris from the surface of lakes and oceans. Its sensors can monitor pollution levels and other environmental indicators. It is electrically powered, emission-free and can collect hundreds of kilos of rubbish at a time. Richard Hardiman is the founder of Ranmarine Technologies, the company responsible for Waste Shark:

"What we're trying to do is create a small enough vessel that will get into tight spaces where waste collects, particularly in the harbours and the ports, and stop all that waste being taken out into the greater ocean.

"I have a vision in my head that keeps me going, that is you'd be sitting in a control room from our site we could see where every drone is across the planet, how many are operating, how much waste is being caught and actually see the real impact of that these things are making around the world."

This is one of the projects that received support from the European funds allocated to making plastic circular. Ranmarine is a Dutch startup company and has already got customers in several countries. Tessa Despinic is its design engineer:

"The basic function of the WasteShark is very simple. It just swims around and collects trash from the surface. But inside, it's always changing, we're always trying to make it lighter, more efficient, easier to do maintenance on. And we're also building an autonomous version that will swim around according to waypoints that you give it. So we're always working on that and making it better."

The European Union is leading the global fight against marine litter. Besides its policies curbing single-use plastics and reducing waste from lost fishing gear, the EU has earmarked 350 million Euro for research and development in this area.