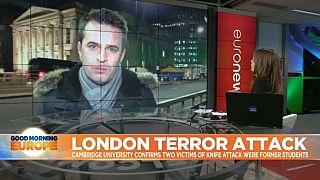 Londoners have flocked to London Bridge to pay their respects to the victims of Friday's terror attack.

The tributes come as investigators learn more about the attacker, who killed two people on the bridge before being shot by police.

He's been named as Usman Khan, a convicted terrorist who had secured early release from prison. His release has raised fresh questions about the UK's anti-terror laws and put the issue into the heart of next week's general election.

"His release was necessary under the law because of the automatic early release scheme under which he was sentenced, that is the reality and that was brought in by Labour with the support of Jeremy Corbyn and the rest of the Labour party," he said.

But the Labour Leader of the Opposition hit back, claiming Johnson's Conservatives had slashed law and order budgets which made it more difficult to stop terror attacks.

"The government can act to make such acts of terror less rather than more likely. Community policing, the probation service, the mental health service, youth services and social services all have a vital part to play in this, as does our education service," he said.

"When those public services are cut back, as they have been during the past decade of austerity, they leave behind huge gaps and that can lead to missed chances to intervene in the lives of people who go on to commit absolutely inexcusable acts."

"The war on terror has manifestly failed" - Jeremy Corbyn

Corbyn also double-downed on his long-held opposition to foreign interventions, saying Britain's forays into overseas wars had increased the chance of terror at home.

"For far too long, our country's leaders have made the wrong calls on our security. Their mistakes in no way absolve terrorists of blame for their murderous actions. But if we are to protect people, we must be honest about what threatens our security. The threat of terrorism cannot and should not be reduced to questions of foreign policy alone," he said.

"Too often the actions of successive governments have fuelled, not reduced, that threat. Sixteen years ago, I warned against the invasion and occupation of Iraq. I said it would set off a spiral of conflict, of hate...and the terrorism and the misery of future generations. It did. And we are still living with the consequences today of that decision in 2003."

UK voters go to the polls on Thursday 12 December.