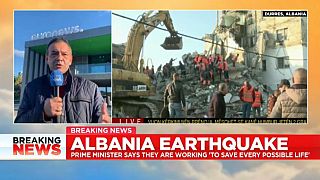 'A picture I will never forget': Euronews Albania chief on Earthquake

Euronews Albania's Deputy Editor Franko Ergo, spoke to Good Morning Europe, where he described the moment he and his family ran from their home as it shook from the powerful 6.4 magnitude earthquake.

The quake, which struck at 3:54 a.m. local time, has killed 6. A number of buildings have also collapsed in the tremor.

Ergo detailed how he immediately feared for his daughters who were sleeping in the next room. When he escorted them outside, 'the whole city was out,' and people were trying to keep clear of tall buildings.

The powerful quake was relatively shallow, measuring around 10 kilometres below the ground's surface. The epicentre was north west of the capital, Tirana.

A nationwide rescue operation is underway, with civilians joining soldiers in digging through the rubble of several cities including Tirana, Thumana and Durres.

You can watch his full interview in the player above.

Listen: What's the deal with the new European Political Community?