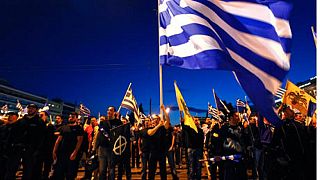 The rise in Golden Dawn's political fortunes shocked both Greece and Europe.

Its membership included fascists and neo-Nazis. As recently as the 2014 European elections, it had the support of around half a million Greeks. That support base gave it 3 MEPs, and 16 seats in the national parliament.

But the party's fortunes have waned in recent years, leaving it fighting for its political survival and embroiled in a 4-year-long murder trial.

And it's the group’s founder at the centre of the scandal. Nikos Michaloliakos stands accused of murder.

Prosecutors say he instigated the attack against the rapper Pavlos Fyssas. The vocal critic of Golden Dawn was ambushed and fatally stabbed in - 2013.

Michaloliakos is facing up to 20 years imprisonment for his part in the killing. There are more than 70 defendants in the trial, making it particularly complex, but it's finally expected to conclude by the end of the year.

But whatever the verdicts in the trial, the party looks to be over for Golden Dawn.

In its heyday, it was seen as an antidote to the global financial crisis. As the debt crisis squeezed Greece, working classes jumped at an opportunity to rebuke the political establishment.

But Golden Dawn did little to hide its fascist leanings, for a time, attack squads roamed the streets of Greek cities – their chant “Blood, Honour, Golden Dawn,” was an echo back to the Hitler Youth.

The trial has sparked a thorough investigation into the party's operations. Its leaders have been held in detention on suspicion of forming a criminal organisation.

Now, with their MPs voted out of the office and their website periodically closed down, the sun is setting on Greece's Golden Dawn.