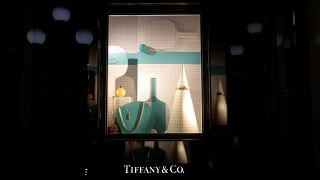 They are two of world’s most distinctive luxury brands – Tiffany & Co. jewellery, sold in the iconic little robins-egg blue boxes - and LVMH, known for its logo-heavy luggage and leather goods.

Now France’s LVMH is targeting the US-owned Tiffany & Co. with an unexpected takeover bid: a cash offer of $14.5bn.

LVMH wants to strengthen its position in jewellery, adding to its $5.2bn purchase of Italian jeweller Bulgari in 2011.

It’s known to be the most powerful luxury goods company in the world, and an ambitious one, with the likes of Christian Dior, Fendi and watchmaker Tag Heuer in its portfolio.

A takeover of Tiffany would be bigger than the $7 billion LVMH paid to acquire the Christian Dior label in 2017.

For 70-year-old Bernard Arnault, the French company’s founder, chairman and chief executive officer, it would be his first major transaction since the purchase of luxury hotel chain Belmond last year.

A Tiffany takeover by LVMH could be one of the largest deals in any arena by a European company this year.

LVMH also made headlines in May 2019, by partnering with the singer Rihanna for a new ready-to-wear fashion range.

That came on the back of her Fenty Beauty line with LVMH – which generated 500 million euros in its first full year of operation.

Tiffany, on the other hand, has been hit by some challenges, such as lower tourist spending, a strong US dollar and a trade war between the US and China.

LVMH is still profiting from a wave of demand from China for luxury goods.

In fact, the company is doing better than expected, with a 19% sales gain for its key fashion and leather business in the most recent quarter.

But this takeover attempt is far from a done deal; some reports say Tiffany will rebuff the offer.

Currently, Tiffany’s advisers are continuing to evaluate the bid.