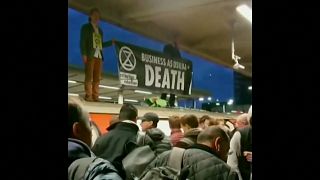 Extinction Rebellion climate protesters climbed on top of a train in east London during rush hour on Thursday, drawing the ire of commuters.

The video showed one of the activists being dragged down from the top of the train and onto the ground as angry commuters surrounded him.

A Transport for London staff member attempted to stop commuters from clashing with the man, shouting "don't do it" as they tried to attack him.

More than 1,400 people have been arrested since the group began blocking roads, bridges and airports in London a week ago to demand faster action on climate change. Most have been released without being charged.