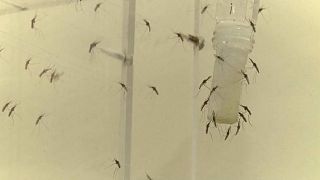 A conference in France, which kicked off on Wednesday, aims to raise funds to combat these deadly diseases and condemn them to the history books.

The Global Fund Forum aims to save 16 million lives within the next four years as well as averting 234 million infections worldwide.

It aims to do this by raising €12 billion from international governments, companies and individual donors.

The triennial event, which is being hosted in Lyon, France on October 9 and 10 consists of a partnership of governments, NGOs and private companies.

Peter Sands, the Executive Director of The Global Fund, told Euronews: “We have, roughly speaking, halved the death toll since the Global Fund was created.

"However, that’s not enough, we want to end the (HIV/AIDS, tuberculosis, and Malaria) epidemics by 2030.

"And the reality is that we could do it, but we are not on track right to achieve that goal.”

Sands went on to say: “To get back on track, we need more money, more innovation, more collaboration, and more leadership to drive effective execution.”

A disease first recorded centuries ago, tuberculosis (TB), is still a prevalent killer.

Its symptoms are not obvious but its consequences are: TB kills three people every minute.

Experts estimate a third of people who have TB go undetected and untreated – infecting others with their coughs.

Drug-resistant TB is on the rise, and the Global Fund warns it poses a potentially catastrophic risk to global health security.

Eliud Wandwalo, senior coordinator for tuberculosis at the Global Fund, said: “TB is transmitted through the air.

"You can get TB anywhere you go and I think the best way to prevent your country or your people from getting TB is to really fight it where it comes from.

"Anyone can get it because of the migration we have. So I think countries need to wake up.”

Chief Scientific Officer at Johnson & Johnson, Paul Stoffels, said developing drugs to combat the disease is an expensive business: “It’s as expensive as a cancer drug, an immune drug. It takes the same time, the same effort.

"But, if there’s no real market in the world, it’s very difficult to put a billion dollars behind a TB development programme.”

Watch Good Morning Europe's interview with Peter Sands, Executive Director of The Global Fund in the player above.