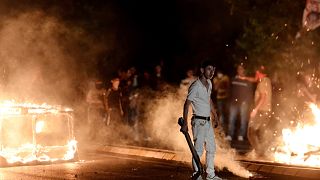 Trials have resumed for more than a dozen people accused of organising and financing one of the largest waves of protests in recent Turkish history.

The civil unrest began in May 2013 over plans to build artillery barracks in Gezi Park, Istanbul, but spiralled into a larger anti-government protest.

The demonstrations continued for almost three weeks and expanded to 79 cities across Turkey. Eight people were killed — including one police officer — and almost 10,000 injured.

Businessman Osman Kavala and 15 others are accused of "organising and financing the protest and attempting to overthrow the Turkish government”.

Kavala's wife, Dr Ayşe Buğra Kavala, told Euronews that there was no real evidence in the indictment to support him being a financier and organiser of the protests.

The charges relating to the Gezi Park protests are not the only reason for Kavala's detention — he also stands accused of having connections with the organisers of the failed coup attempt on July 15, 2016.

The Turkish government claims that Kavala's company financed the organısers of the protest.

Prosecutors are asking for between 605 and 2,970 years in prison for the 16 defendants if found guilty.

The trial is expected to last two days.