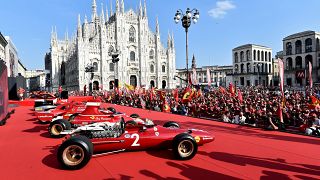 After a first seasonal win at Spa-Francorchamps, the Ferrari team is confident that they could have an encore at Monza.

The team celebrated Scuderia's 90 year anniversary at a packed celebration in Milan's Piazza Duomo on Wednesday.

This year also marks the 90th anniversary of the Italian Grand Prix.

Champions and drivers were present at the celebrations which took place on Wednesday.

On Friday, Charles Leclerc was the fastest in practice at the Italian Grand Prix. Ferrari have not won at Monza since 2010.