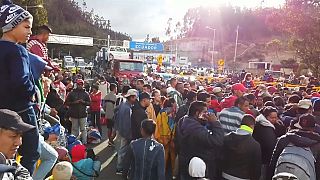 Ecuador shut its border on Monday (August 26) to hundreds of Venezuelans waiting to cross, as new restrictions from Quito on migrants fleeing the OPEC nation come into effect.

The country now requires a visa for Venezuelan citizens, part of stricter immigration policies being implemented in several countries.

More than 85,000 Venezuelan migrants crossed into Ecuador from Colombia in the last month ahead of the new measures.

But other migrants were not so lucky.

Some 320,000 Venezuelans currently live in Ecuador. The government estimates that figure could increase to nearly half a million by the end of the year.

Unlike its neighbours, Colombia has not put in place stringent immigration requirements, instead of encouraging migrants who entered the country informally to register with authorities so they can access healthcare, school places and other social services.