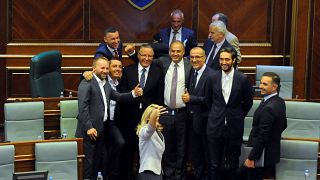 Kosovo's political parties must rapidly form a government following an upcoming snap election, in order to prevent delays to Kosovo's aspirations to join the EU and NATO, a senior official has told Euronews.

Aridan Arifaj, deputy Chief of Staff to President of the Republic of Kosovo told Euronews that it was critical that Kosovo's political parties formed a government rapidly after snap elections.

“It is very important that right after the elections a new government is formed in the shortest possible time, that it doesn’t take months for political parties to come to an agreement on forming a government."

He added, that the snap elections called on Thursday, almost one month after the resignation of Prime Minister Ramush Haradinaj.

Haradinaj was called to The Hague last month as a witness by war crimes investigators, he subsequently issues his resignation, but has vowed to contest the next election.

He added that any delay in forming a government, would lead to knock on delays in a number of international issues.

"Exactly because we have important process ahead – a peace agreement with Serbia that will bring mutual recognition and a UN seat for Kosovo, a continuation of reforms on rule of law, economics on political institutions and our aspirations to join NATO and the EU."

"If the government takes longer to form, all these process will be further delayed," he told Euronews.

Arifaj also defended the slew of Kosovar politicians being hauled to The Hague as witness, saying that whilst disruptive to governance, it demonstrated the country's commitment to justice, and willingness to cooperate with international institutions.

"[It's] an established practice for any senior official to first of all cooperate with justice, to cooperate with international justice and resign whenever they are called in order to allow justice to proceed without any interference from politics or from political role of any individual. So it’s a good practice."

He added, "It shows that Kosovo really wants to cooperate with international justice, that it wants to solve all its problem in cooperation with international partners. Of course, it means that in this case, the Prime Minister resigned and we will go to new elections and important process are delayed."