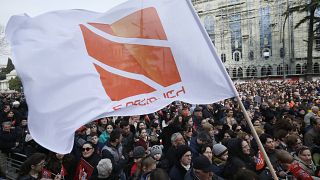 Two news anchors in Georgia walked out during a live broadcast over allegations their television station was being taken over by the government.

Rustavi 2's Diana Jojua and Mikhail Sesiashvili, the hosts of the popular Kurieri news programme, quit live on air just days after the sackings of prominent journalists and a takeover by government ally Kibar Khalvashi.

"For 13 years I’ve been greeting you from this studio and today I’m more nervous than I was when for the first time I said ‘This is Kurieri at 9,’” said Jojua. “Now I have to say goodbye.”

Several prominent journalists at Rustavi 2 have been sacked since the European Court of Human Rights ruled in July that the channel belonged to Khalvashi after a decade-long dispute over ownership.

Founded in 1994, Rustavi 2 has long been a bastion of the independent media in Georgia, Margarita Akhvlediani, JAMnews editor in Tbilisi, told Euronews' Good Morning Europe.

Rustavi 2 was the “only channel in the country purely independent from the government and from the authorities and definitely not controlled by them," she said.

Akhvlediani said that in Georgia, where as much as 80% of the population gets it information from TV and not from online or print media, "it’s an especially serious event" that “[leaves independent media] in a very difficult position”.

“It would mean that the main, the most important, the most famous channel of a pro-Western course for Georgia now doesn’t exist, and is replaced by other people who would lead it in a different direction," she said. "Really it’s a disaster, no other channels exists, it was the only one.”