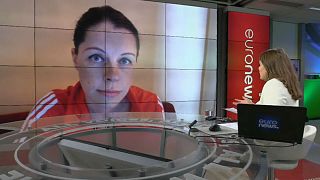 Russia is a fake democracy, claims activist, ahead of planned protests

Russia is a fake democracy, an activist has claimed to Euronews, as Moscow gears up for a fourth successive weekend of protests.

She made the claim 20 years since Putin came to power: he was appointed prime minister on August 9, 1999, by then-president Boris Yeltsin.

The anniversary comes after two consecutive weekends of protests in Moscow, which authorities consider unauthorised and illegal.

They began after opposition candidates were allegedly prevented from standing in forthcoming city council elections.

It has seen around 2,000 people detained.

"We are in an authoritarian regime and lots of people get out to protest because they want Putin gone, they want this regime gone," she said. "Now we are building up this protest and building up the number of people on the streets. Before this summer, we didn't get enough people out onto the streets.

"We need at least half a million people on the streets to lead to a change of those in power.

"The authorities use the police - they are like Putin's personal army.

"Putin cannot just leave; he crossed a line a long time ago and he can only force his way to (retain power) as long as he can."

Chernikhovskaya said she was meant to be a candidate in the elections but that authorities were going to use her as a "spoiler" candidate.

"A spoiler means a fake candidate who is only there to pretend this is a real election and that there is a choice, but, in fact, there is no choice.

"They use administrative resources to vote for the candidate approved by the authorities; the rest of the candidates only get 3 or 4% (of resources).

"This is a fake democracy."