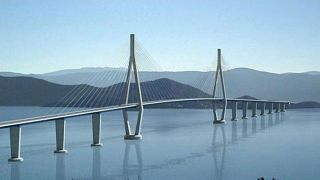 Much-delayed €420m bridge to connect Croatia back on track

A much-delayed infrastructure project to connect two parts of Croatia is back on track.

Work to build a 2.4-kilometre bridge connecting the country's south with the mainland stalled for more than a decade after the financial crisis hit in 2007.

But construction got underway again after the Croatian government awarded the contract to China Road and Bridge Corporation last year.

Now, concrete is being poured into the steel bases of the bridge by Chinese construction workers. They live in containers on the site and are working flat out to complete the project by the August 2022 deadline.

Peljesac Bridge, one of the EU's major infrastructure projects, is set to cost €420 million, with the European Commission committed to paying €357m.

While most of the construction money will go to China, Austrian and Greek firms have just been awarded contracts to build the 32 kilometres of connecting roads, tunnels and viaducts in the area around the bridge.

Is the bridge necessary?

After the dissolution of the former Yugoslavia, the Dalmatian Coast was carved up.

It gave Bosnia and Herzegovina its only access to the sea at the Neum corridor but left Croatians with two border checks to go from the southern part of the country to the mainland, for example from Dubrovnik to Split.

Peljesac Bridge will mean the end of this inconvenience for Croatians.

The whole project, though, throws up questions about the future of the European Union and Croatia's bid to join the Schengen Area.

If Bosnia and Herzegovina join the EU and its borderless area in the future, then this bridge would be rendered useless.

At least from the point of view of remvoing border checks, as both countries would be in the EU's Schengen Area.

But the government and the construction firm insist it will also provide a safer and faster road, anyway.

The people in this part of Croatia are overwhelmingly in favour of the bridge.

Marta Vidović, who lives in Komarna, where one end of the bridge will arrive, said: "I think it's easier to build a bridge, rather than for example fight or try to make some arrangements with Bosnia and Herzegovina."