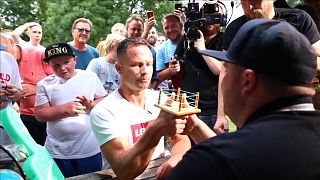 The unusual sport is played in rounds at the Lock's Inn pub in Beccles, Suffolk, on a wooden board that resembles a small wrestling ring.

The contest works in three-minute-long matches against each opponent, who usually never make eye contact but instead stare closely at each other's thumbs.

There is both a men's and women's championship, with the sixty-second matches beginning with a customary chant, and ending when an opponent is pinned for as long as it takes to say the words "One, two, three, four, I win the thumb war!"

In the men's final the top spot was taken by Paul 'Under the Thumb' Browse for the fourth time in a row. He beat off stiff competition 'The Thumbertaker'.

Meanwhile in the women's competition Janet Coleman aka 'Nanny Thumb' beat 'Suzy Thumb'. Janet is also the mother-in-law of the world champion.

The championships will be held again next July.