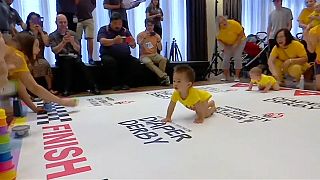 Babies at the races in New York City

The record heat has forced New York City to cancel the annual city triathlon, but the babies were off to the races on Friday (July 19) in the annual Diaper Derby.

Held indoors at a midtown Manhattan hotel, heats of six babies are placed on 3.7-metre mat and encouraged to make it to the other side.

The tykes must exceed six-months-old, but still in the crawling phase - which means the participants were unwittingly making for plenty of cute moments.

There was the crier who nevertheless stayed on course. Plenty of his peers decided to go their own, paying no mind to the race itself.

A total of 31 babies participated, leading up to the championship round, which brought together the victors from the earlier heats.

There was a clear winner, 14-month-old Lucas Ho, of Staten Island. After the race began, he was the only one who moved at all.