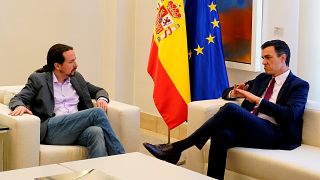 Could Spain be heading towards another general election?

Could Spain be heading towards a fourth general election in as many years?

It is possible, as debate begins in Spanish parliament on Monday over the premiership of Pedro Sanchez.

Sanchez has been working to form a coalition with the far left Unidas Podemos party, which he once declared to be "the preferential partner", but he's clashed with the party in recent weeks.

Podemos last week voted to back Sanchez, but only if the party are given key roles in his future cabinet.

Podemos consulted its members last Thursday on whether the party should demand that top officials be part of the government as a condition for supporting Sanchez in the parliamentary vote. That was backed by 70% of the party's supporters who took part in an internal vote.

After days of tense talks, negotiations between Podemos and the Socialists reached a turning point on Friday after Iglesias said he was willing to give up having a post in a coalition government, accepting one of Sanchez key conditions.

Sanchez has only been the country's leader in an acting capacity since April after failing to win a majority in the Spanish general election.

Lawmakers will vote on Tuesday on Sanchez's leadership. If he receives the support of 176 members of parliament he will be confirmed as Prime Minister with an absolute majority.

But if he doesn't, things get a little trickier.

Lawmakers will vote again, 48 hours after the initial vote and he'll need to be confirmed with a simple majority. At the moment, this is considered to be the most likely option.

However, if this fails again, King Felipe VI may have to stand in and propose new candidates. But, this isn't likely, it's more accepted that the King will dissolve both Chambers and will call new elections with the endorsement of the President of the Congress.

Spaniards may then be heading back to the polls on November 10th.