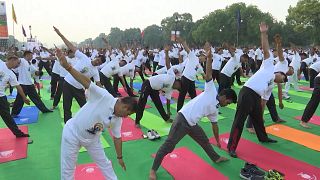 "Let our motto be yoga for peace, harmony and progress," said Modi before joining in a nearly hour-long yoga session.

The practice began in ancient India, and Modi has described yoga as free health insurance and encouraged people to make it a part of their daily lives.