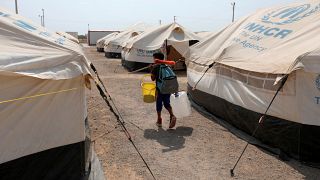 Four years after one of the biggest migration crises Europe has ever seen, it is World Refugee Day. And even though the number of migrants arriving on Europe's shores has dropped dramatically, the EU is still struggling to find solutions for those who do come. And worldwide, the issue has broken some stark records.

70 million people in total are displaced from their homes, double the number from twenty years ago according to the UNHCR. The UN blames the issue on persistent conflict, wars and persecution.

"It's a fundamentally important day, because we should all be aware that there are now more than 70 million refugees and internally displaced people across the world," said Jan Egeland, the Secretary-General of the Norwegian refugee council.

"We haven't had such numbers since the Second World War, it's a wake-up call for leaders across the world. International diplomacy is failing these people, there's no effective conflict resolution, and more importantly, there is no way out from this, for many of the people who flee."

Egeland was on a trip to Ethiopia when he spoke to Good Morning Europe. Ethiopia, like many other countries that neighbour conflict zones, is home to nearly a million refugees in addition to internally displaced people.

"Ethiopia is an appropriate place to be on World Refugee Day, because it is on one side, among the more generous countries in the world in receiving refugees," said Egeland.

"Europeans should learn from Africa in being generous in opening the doors when defenceless people ask for protection. But Ethiopia is also the place with the highest number of new displacements, due to violence that happened last year. This is mostly inter-ethnic fighting, this is people being attacked in their homes and their villages, and I was in a place yesterday, I met in an abandoned factory building 3,500 people who had fled violence, they were crammed together in a place with 16 latrines. It was horrific conditions really, and they were still afraid to go home. I called for more assistance, more help, so that people can come back to their homes."

Europe has struggled to find common ground on migrant policy, while NGO rescue ships continue to scoop people off rubber dinghies in the Mediterranean. Last year, the Aquarius was stranded at sea for 10 days after it was refused entry. It eventually was allowed to disembark in Spain, but a year later Italian regulations and legal attacks have ceased the ship's operations- and just this week, the Sea Watch 3 was turned away from an Italian port, leaving it stranded with around 50 on board.

"Europe is indeed in quite a fundamental crisis now, in its participation in global responsibility sharing," said Egeland.

"There's a notion in Europe that we are overrun by refugees. Reality couldn't be further away from that. Most European countries do not take either refugees or internally displaced people. Number two, Europe is not giving that much support either, to those who do receive assistance. For example, in Ethiopia, the appeal for life-saving relief for these people is less than a third funded. So the Ethiopians who flee are not getting the attention or support they should. And Ethiopia as a generous country receiving refugees is also not getting the support they should. Europe is neither giving protection in Europe, nor giving enough in supporting countries which give protection."

To mark the day, the UN is organising walks worldwide as part of a campaign called #StepWithRefugees.