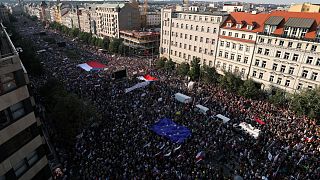 Organisers say up to 120,000 people have protested in the Czech capital Prague calling for the resignation of Prime Minister Andrej Babis.

The protest is one of the biggest seen in the country since the fall of communism in 1989.

Babis is accused of the fraudulent use of EU subsidies. He has denied any wrongdoing and has attacked a recent European Commission audit that leaked to the media last week.

In preliminary findings, the audit determined that his Agrofert group should not have had access to European Union development funds in recent years because of conflicts of interest.

Protesters held up pictures of Babis with the simple message ’resign’ and speakers addressed the crowds in front of a backdrop reading ’prime minister or crime minister?’

The group called "Million Moments for Democracy" has been staging rallies every week since the end of April, with an estimated 50,000 people joining a protest in Prague's Wenceslas Square two weeks ago.

The organisers said yesterday's protest had more than doubled that number.

The director of Transparency International in the Czech Republic, David Ondracka, has urged people not to give up: "Let's make a revolution out of Babis, get rid of him, ask for his resignation because enough is enough!"

Babis is the country's second richest individual and he denies fraud. He has attacked a recent draft EU report demanding the return of over 17 million Euros in subsidies.

Prime Minister Babis came to power in 2017 at the head of the populist ANO (Yes) party. He campaigned on an anti-corruption and Eurosceptic platform, forming a minority government with the left-wing Social Democrats. Despite the demonstrations to oust him, his ANO (Yes) party came first in last month’s EU elections month, with 21.2% of the vote.

Watch Good Morning Europe’s report on the Czech Republic protests in the player above.