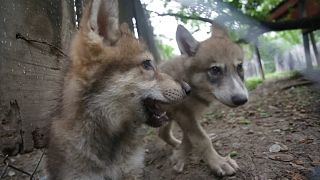 The two-month-old pups were born to their mother, Lia, who has been raising them apart from her pack in a separate enclosure since their birth.

According to the zoo's director the pups "sleep a lot, they're very mischievous, they play and are getting to know the pack which is next to them."

The Canadian wolf is a subspecies of gray wolf native to North America.