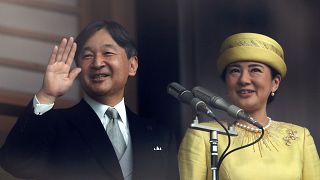 Japan's new emperor greets his subjects for the first time

Thousands of well-wishers queued at the Imperial Palace on Saturday (May 4) as the new Japanese Emperor Naruhito and Empress Masako made their first greetings to an ecstatic public three days after acceding to the throne following the first abdication in two centuries.

Naruhito's father, Akihito, 85, abdicated on Tuesday (April 30) in a simple ceremony, nearly three years after he first expressed fears that advancing age might make it difficult for him to perform his duties. It was the first abdication in 200 years.

People from all over Japan started to queue for hours to have a glimpse of the new Emperor. Hiroyo Kato, who made a day trip with her 16-year-old daughter, said it was touching to be able to see and hear the Emperor's voice and to be at the historic moment.

The new Emperor and Empress greeted the crowds six times on Saturday, along with other imperial family members.