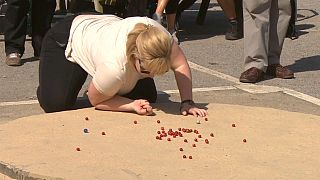 The German team '1st MC Erzgebirge' won the World Marbles Championship on Friday to claim their seventh title in the last 13 years.

They faced off with the British team 'Black Dog Boozers' in the final.

It is said marbles has been played in the village of Tinsley Green in West Sussex for hundreds of years.

To decide who starts the game, each team captain has a "nose drop." The marble closest to the edge of the ring without going outside the ring plays first.

Players are each armed with a "tolley" or "shooter" marble. This is their playing marble and is slightly bigger than the 49 others in the game.

A point is scored for each marble their "shooter" knocks out of the ring. A player's knuckle must be touching the ground when shooting, which is known as "knuckling down".