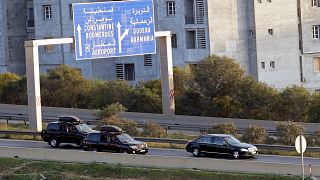 President Bouteflika arrives back in Algiers amid protests

Algerian President Abdelaziz Bouteflika has reportedly arrived back in the country after spending two weeks in a Swiss hospital.

The president's plane flew into Boufarik military airport where he was ferried away in a car convoy.

Since having a stroke in 2013 he has rarely been seen in public. His trip to Geneva ostensibly for routine health check-ups had raised speculation that his condition was far more serious.

The arrival of 82-year-old Bouteflika comes amid massive demonstrations demanding he withdraws his candidacy for a fifth term as president.

On Sunday - the start of the working week in Algeria - teachers, and students went on strike at several universities.

Bouteflika's decision to run for a new term in the April 18 election has angered large swathes of Algerian society.

One young protester told media "Since I was born the only President I’ve known is Bouteflika. I would like to have another one."

Another said, "You know during the last big march on Friday (March 8) everyone was protesting – young, old, men, women, I even saw an 80-year-old woman, this is because we all are against the fifth term."

The discontent with Bouteflika has spread outside the country among Algerian's living abroad. In Paris police said up to 10,000 people gathered in the Place de la Republique in the east of the French capital calling on the ailing Algerian president to stand down.