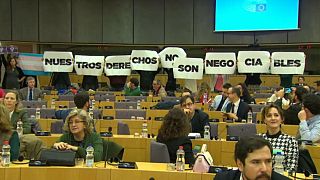 Spain was until recently one of the few European countries without significant support for a far-right party.

All that changed last December when the populist VOX Party won seats in the regional parliament. With the party expected to take seats in the EU elections in May – the controversy seems to have arrived ahead of them.

“Our rights are not negotiable” was the message on display at the European Parliament on Wednesday. A powerful message from a group of Parliament officials protesting a conference involving the far right Spanish political party VOX.

Joined by MEPs, the protesters called out VOX’s alleged homophobic and anti-feminist attitudes. A Spanish MEP for the European Free Alliance called their presence a “shame for democracy”. “It is a shame for the European Parliament that there is a racist, homophobic, xenophobic party that incites hatred in these facilities today”.

Entitled “Catalonia: A Spanish Region”, the controversial conference centred around the future of the disputed area. VOX is not only against Catalan independence but they also want to cede political control of all of Spain’s 17 autonomous regions back to Madrid. The last time the Spanish capital had full control of every region was under General Franco.

After the protest, VOX's Secretary-General, Javier Ortega Smith, accused those supporting the independence push of being anti-democratic.

“We have come to dismantle the lies of separatism that are found in these corridors and in these rooms where they bring that great lie, that terrifying lie which is the most despicable totalitarianism”.

The presence of VOX in Brussels initially stirred the pot a month ago when they blocked a conference on the future of Catalonia from taking place. Exiled Catalonian leader Carles Puigdemont was due to be present. The European Parliament blamed a security risk for the cancellation.